The foramen ovale is a connection between the right and left atria which is open (patent) in the fetus and closes in most infants spontaneously. About 10 percent remain open after birth and usually produce no symptoms. But there are some circumstances that may require closure. This can now be performed by a catheter, i.e. percutaneous.

According to Dr. Uretsky “Most interventional cardiologists who treat adults do not have extensive experience in closing a PFO. Although we felt comfortable doing the procedure, utilizing a mentor with expertise directly bene ts the patient. After access was obtained, we spotted a mobile artifact on echocardiography at the end of the closure device highly suggestive of thrombus. These images were transmitted to the telementor who agreed with the diagnosis and suggested at this point to retrieve the device to avoid the possibility of a thromboembolic event (Figure 2, 3). When the device was retrieved, the suspicion was con- rmed, with a thrombus noted at the device tip (Figure 4). The telementor further guided the operators to ush the sheath and adequately clean the thrombus from the device, with excellent results. The patient was discharged much improved.”¹

Google Glass is a wearable computer that is currently in a prototype phase (“Explorer” version). In essence, it is wireless extension of a mobile device (“smart” phone or tablet) with visual capability. Like a mobile device, the potential of Glass does not rely solely on its hardware but on the software/apps which are currently being developed. There are five components: 1) bone conduction transducer that is able to transmit audio through the temporal bone and mastoid process, 2) a microphone that captures voice and allows user to make phone calls and video conferences, 3) a camera that can record 5 mega-pixel photographs and 720p HD video that can be transferred live via the internet, 4) a computer with gyroscope, GPS, WiFi, Bluetooth, and 12 GB of storage, and 5) a prism which provides the Glass display to the wearer.

Dr. Assad-Kottner was asked what challenges he had experienced when trying to use Glass in the hospital. He explained: “Glass establishes a connection between 2 or more individuals using Google’s Hangout platform. This means that the information being transmitted between the individuals is not HIPAA compliant. In our case we had a detailed conversation with the patient and his family regarding this issue and they provided a signed informed consent.

Second, the quality of the video-conference is directly related to the bandwidth speed (both upload/download) of the network Glass is connected to. In order to have a good conference experience at 30 frames per second a connection of 2 megabits per second is required. Speeds can be lower but this will a ect the quality of the video stream. In addition, if procedure is performed in a cath lab, leaded walls will likely degrade the network signal. Also, battery life does not last long if using it in video-conference. A fully charged battery can drain in less than 30 minutes. For this reason an external battery pack is usually required.”

The concept of telementoring is becoming a feasible and accessible option for many professionals. As Dr. Assad-Kottner explained, the reason for this is directly related to “Moore’s law” which states that every 18-24 months the number of transistors in an integrated circuit doubles. What this means is that technology is exponentially becoming cheaper, smaller, faster and more powerful and therefore more accessible. In 2014 the number of mobile-connected devices will exceed the number of people on earth and mobile data is expected to grow 11 times in the next 4 years reaching a whopping 18 exabytes (1 billion gigabytes) of transferred information. This is the reason why telemedicine, telehealth, and now telementoring are getting so much attention. We are entering an interconnected era in which wearable technology will empower individuals to communicate with each other seamlessly.

The UAMS team is now working to optimize transmission so as to view catheterization procedures in different locations within the institution with the ability of interventional colleagues to view and consult on the best approaches to manage the patient and improve patient outcomes. 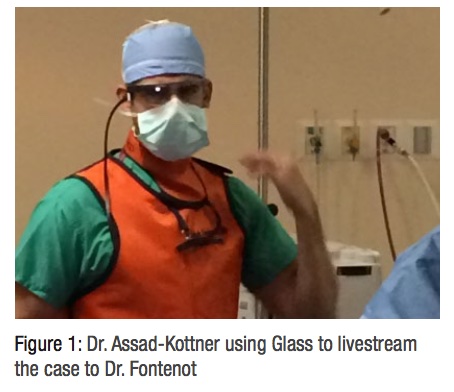 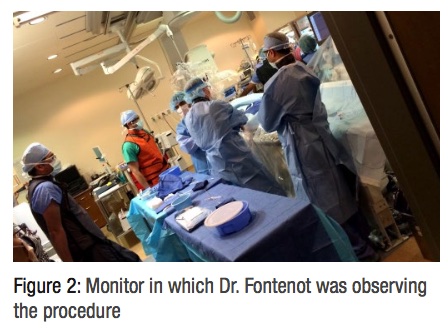 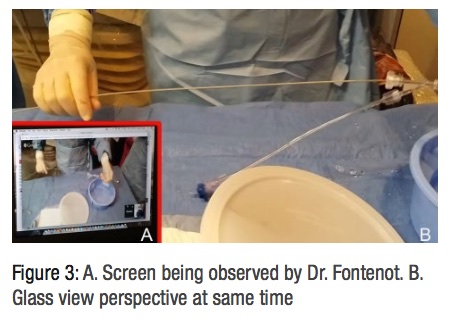 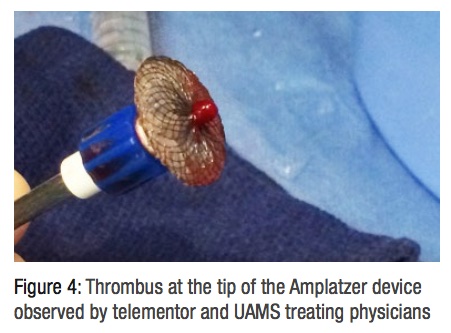